An Energetic Future for the 2020s?

During the autumn one of the weird arid plants in our front garden began to grow a seed pod like something out of Jack and the Bean Stalk. The neighbours, who have been here for eons, exclaimed that they’d never seen anything like it before. It topped out at about 5 meters, waving in the winds the buffet this part of the Sussex coast.

As Christmas began to loom my small son declared that we needed some Christmas lights at the front of the house, and I had a brainwave. I bought some cheap solar string lights off a well-known online shop, wobbled up a ladder and created what I think must be the only illuminated Desert Spoon plant in England.

Why am I telling you this? Well, those solar string lights cost about a tenner and, after a sunny day, light up beautifully until well into the night. They’re a product of three different technologies that have advanced enormously in recent years. A similar system would have cost hundreds or even thousands of pounds only twenty years ago.

The lights themselves are white LEDs. They sip a tiny fraction of the power guzzled down by the incandescent bulbs of old, reducing the size of the necessary solar system and making them far less likely to set my plant on fire. The tiny solar panel is a descendant of the costly cells that used to be reserved for powering satellites, but is far more efficient and vastly cheaper. During the day the solar panel stores power in a small rechargeable battery – either nickel metal hydride or lithium ion – which cost a fraction of what they did a few years ago. 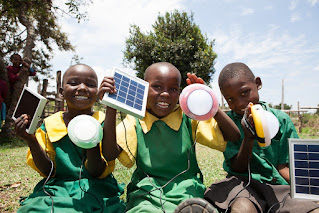 Individually, these advancements in lighting, solar generation and electricity storage are enormously important. Together, they open up entirely new applications, such as zero carbon lighting systems that don’t need a connection to the electricity grid.

At the end of a pretty miserable year these kinds of technological advances are cheering me up a bit. In fact, if we were allowed to invite people round to fill our empty Christmas table I think I’d invite the king of techno-optimists, Tony Seba. He’d cheer me up a lot more than a few lame cracker jokes and an oversized turkey.

Seba is a lecturer at Sandford University and founder of the perennially optimistic RethinkX consultancy. In a nutshell, he believes that technological change can happen very quickly, largely driven by market forces. Conventional wisdom suggests that change in areas such as transportation and energy supply takes decades, with lots of resistance to new technology. Seba thinks that new technologies will scale quickly and the old collapse like a house of cards.

A good example of this kind of rapid change is the device that you may be reading this on – the smartphone. If we look back to 2007 the few smartphones available were slow, clunky and not very easy to use. Nokia ruled the mobile phone roost, and every prediction was that their increasingly tiny handsets were set to stay on top for some time to come.

That year, the original iPhone launched. With hindsight it’s easy to see that this was the start of a revolution, but at the time the phone was hugely expensive and quite limited. There was no app store, satellite navigation or 3G internet, for example. But within 5 years touchscreen smartphones dominated the market, with iPhones and their (mostly) cheaper Android cousins being churned out by the million.  Demand for conventional mobile phones collapsed, and the battered remnants of Nokia were sold to Microsoft in 2016.

Seba thinks that electricity is in line for a similar rapid transition in the 2020s, with renewable generation (solar and wind) and battery storage set to dominate the global electricity market. The report highlights the staggering cost reductions we’ve seen in these technologies. Since 2010 alone, solar costs have fallen over 80%, onshore wind by more than 45%, and lithium-ion batteries almost 90%. 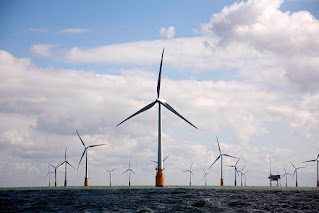 With costs set to fall further, these Solar-Wind Battery systems won’t just become the default choice for new generation, but mean expensive fossil fuel systems will be retired prematurely on economic grounds and replaced with new renewables. Rather than a transition where Government policy drives a  slow replacement of fossil fuel generation, we’d have a rapid gold rush to renewables based purely on market forces.

The really intriguing bit of this scenario is how it turns the idea of electricity as a scarce resource of its head. A solar panel might have a capacity of, say, 400 watts, but it will only generate at full capacity on a really sunny day. The way to get round this problem is a combination of overcapacity and battery storage. Seba’s analysis suggests that the cheapest systems will err on the side of more capacity and smaller batteries, meaning on sunny or windy days a 100% renewable system will generate much more electricity than is actually needed.

We’re actually seeing these scenarios taking place already. In parts of the world such as California the wholesale price of electricity can drop to zero on sunny afternoons, as solar systems pump out vast amounts of power. Currently it’s seen as a problem, but in typical optimistic fashion Seba sees this vast overcapacity as an opportunity he dubs ‘superpower’. When the system hits full stride, smart technologies could turn on hydrogen production, electric vehicles chargers, Bitcoin mining operations and other wonderful new innovations, all benefiting from the cheap excess of clean electricity.

So, when we tuck into our turkey on Christmas Day 2030 will, as Seba predicts, we have finally realised the dream of clean electricity that’s too cheap to meter? Well, it’s worth noting that Seba’s analysis is fairly simplistic. He doesn’t, for example, consider resource constraints, supply chains or opposition from the fossil fuel industries for starters. The story is very much one that the market will provide, which isn’t always the case.

But consider this. When my family heads off on a Boxing Day walk, we’ll almost certainly look down over the vast Rampion Wind Farm, constructed off the Sussex coast in 2018. Twenty years ago, the whole idea of building wind turbines out at sea would have been considered nuts, not to mention vastly expensive. Not anymore, in fact offshore wind is now falling below the cost of conventional, fossil fuel generation. Last Friday, wind power generated 40% of the UK’s electricity supply .

On Christmas Eve 2030 then, Santa and my freaky illuminated plant probably won’t be the only things being buffeted by the wind. It’ll very likely be spinning vast forests of wind turbines out at sea, filling batteries ready to cook our Christmas lunches. And on that optimistic note I’ll wish you a Merry Christmas and a 2021 that’s a little better than the year just past. 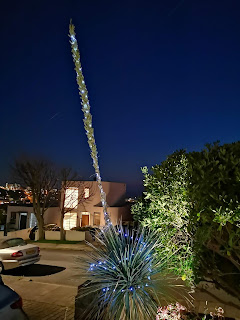 Popular posts from this blog

November 14, 2011
Parliamentary Select Committees are rarely kind to Governments. With a remit to scrutinise the Government's record they normally pick policy areas where heals are being dragged rather than shining examples of success. But even against this background accusing the Government of 'putting the health of the nation at risk' is quite strong stuff. This statement is contained in a new report from the Environmental Audit Committee (EAC), 'Air Quality: A Follow Up Report'. The document is a successor to the EAC's 2010 ' Air Quality ' report, a wide ranging examination of the previous Government's record on air quality. The new report is shorter and more focused, examining what's changed since the previous report was published and making suggestions for key policy changes. As with any select committee report the Committee invited submissions of evidence from organisations and individuals, in his case attracting 26 written submissions. They also heard in
8 comments
Read more

November 01, 2011
Subsidies for solar photovoltaic panels are set to be slashed after the Department for Energy and Climate Change (DECC) launched a consultation on halving the main ‘generation tariff’ available through the popular Feed in Tariffs (FiTs) scheme. The proposed cut will apply to new installations only: individuals and businesses who are already receiving the subsidy will continue to get the full rate. The Government’s reasoning for the proposed cut is a fall in the cost of the solar panels themselves. Whilst this is true, it is largely the result of a glut in the supply of solar panels which would be expected to reverse as the manufactures scale back production in response - the actual costs of producing them is little changed. Behind the scenes though the cuts reflect increasing nervousness by the Government around the impact of ‘green’ commitments on our fuel bills. The cuts may bring to an end a boom in solar installations where solar photovoltaic panels became the best investme
3 comments
Read more

The Green Deal - is it any good?

January 29, 2013
The Green Deal launched this week in a blaze of publicity, unfortunately much of it negative. The scheme has been the Conservative’s flagship home energy efficiency policy since before they even came to power, so the big question is: is it any good? The short answer is that it’s good for some, but not for others. At its heart the Green Deal is a loan scheme for energy efficiency and renewable energy measures, but rather than homeowners paying back the loan directly to the bank the repayments are made via a charge on their electricity bill. The two key innovations of the Green Deal are that the repayments should not exceed the anticipated savings on your energy bill (i.e. your bills will be lower afterwards, even with the loan repayments) and that the loan stays with the property rather than you (if you move the new owner takes over the repayments). The Green Deal is an attempt to address one of the big problems with some energy efficiency and renewable energy measures. Upg
8 comments
Read more

Ed Dearnley
Ed has been working in the environment sector for 20 years. He is currently lodged at Sussex University as a Programme Manager for the Sussex Energy Group. He is a father of two and lives in the windy suburbs of Brighton. Ed is obsessed with seagulls, outbuildings, bicycles, Harveys beer and Brighton and Hove Albion, in roughly that order.